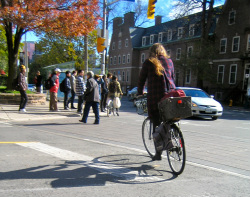 photo credit Jacklyn Atlas TCAT 2012
The goal of our knowledge mobilization is to take the research and new information developed by the project and disseminate it through popular sources such as magazines and blogs; oral presentations, workshops and pilot projects; study tours and conferences; as well as traditional academic publishing. We want the knowledge we gain to be put to use in a wide range  of settings in a timely manner.

Knowledge mobilization is built into the very structure of our project. By partnering with cycling and urban media, as well as non-profit and commercial cycling ventures, our research will reach a wider audience than a traditionally structured research project. Additionally the multi-disciplinary and multi-sector nature of our research enables us to approach knowledge mobilization as an integral part of the project.

In the fall of 2012, we hosted two workshops with our project partners, advisers and interested others. The first focused on the mapping work of George Liu and Emily Watt. We received excellent feedback and ideas from the workshop resulting in further work on mapping. Results will be released in late May at the Complete Streets Forum.

The second workshop focused on Cycling Economies. Our team of three students from the Rotman School of Management, Shafiq Dharani, Rosie Maclennan and David Mitchell, presented an analysis of the cycling marketplace and the potential for social marketing as a strategy for cycling retailers. Additionally Daniel Arancibia presented on the economic impacts of replacing on street parking with bike lanes and James Tay of the the School of Public Policy and Governance presented on a Theoretical Framework for Inclusive Business Strategies. Again terrific feedback resulted from the workshop and reports will be released later this year.

Over the summer of 2012, advisor Lake Sagaris  put together a starting bibliography identifying key documents in cycling-related studies, the growing number of research hubs worldwide and advised on issues arising in the other project streams.

We have released our first resources, by Emma Cohlmeyer, on behaviour change and cycling.

In April 2013, Emma Cohlmeyer presented her work on behaviour change at the World Social Marketing Conference. At the same conference, James Tay and Grant McLean  presented a poster on the Theoretical Framework for Inclusive Business Strategies.
Late in the month, Daniel Arancibia and Beth Savan spoke at a Business Improvement Association meeting on the Economic Impacts of Bike Lanes.
In May 2013,  the new report Mapping Cycling Behaviour in Toronto was released. We are presented the results of our research May 27 at the Complete Streets Forum hosted by our partner the Toronto Centre for Active Transportation. We will also have two poster presentation at the forum: one by Emma Cohlmeyer on Behaviour Change and the second by Katie Wittmann on Mapping Cycling Behaviour in Toronto.
In June 2013, Mikey Bennington and Beth Savan presented at Velo-City 2013 in Vienna. Trudy Ledsham presented at the Garrison Institute's Climate, Mind and Behaviour Symposium.